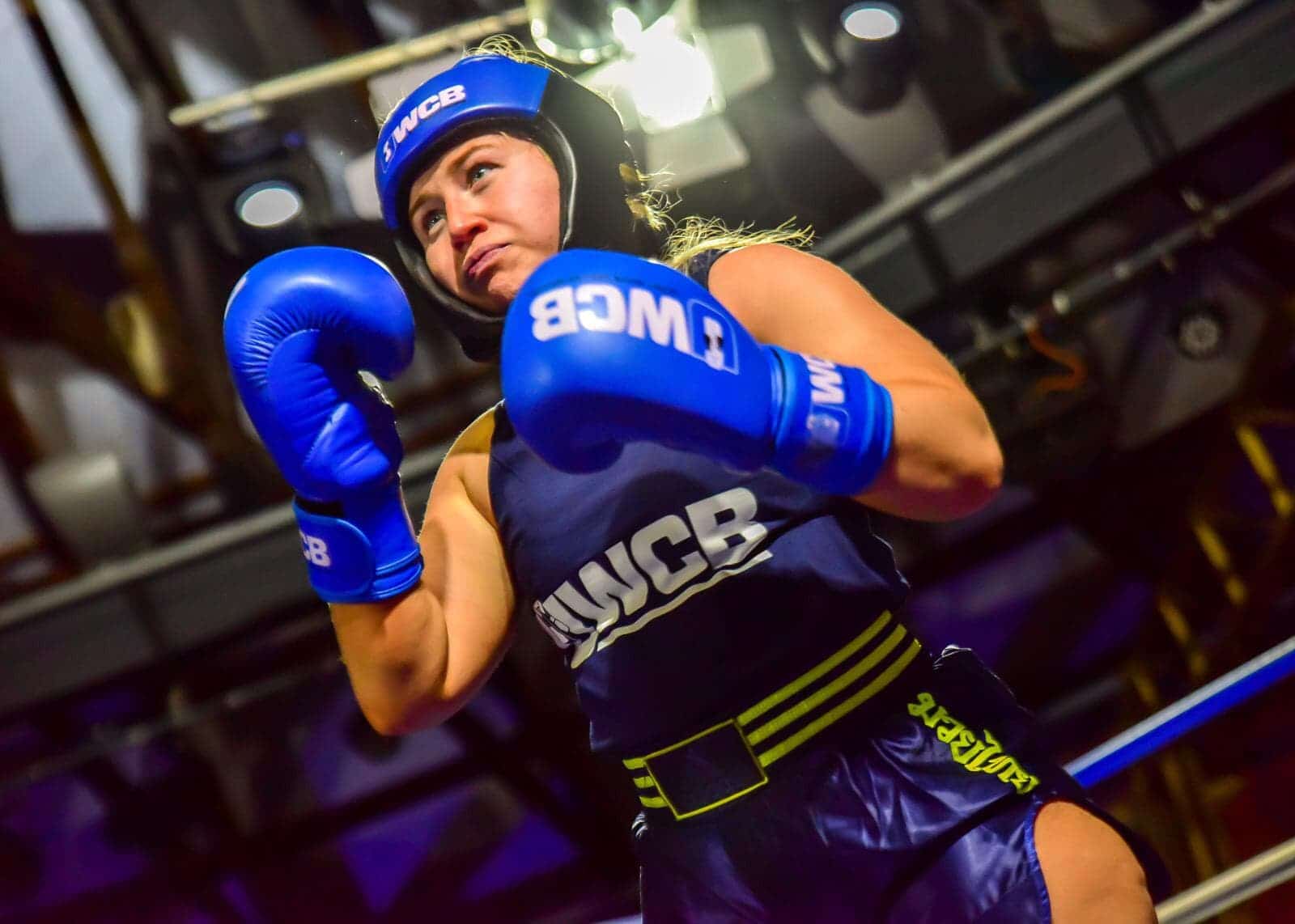 I started working for Ultra Events in 2015 and in 2016 I joined Cancer Research UK. My role involves supporting Ultra’s amazing participants in their fundraising efforts and doing everything I can to help them smash their fundraising goals. I am on hand to offer support and answer any fundraising questions participants may have throughout the whole 8-week journey via Facebook, email and phone.

I loved the idea of taking part in an event, but I never thought I’d pluck up the courage to actually do it. I constantly encouraged people across the UK do to something amazing yet having not done it myself felt hypocritical.

In the summer of 2018, my amazing auntie and childhood best friend was diagnosed with an aggressive brain tumour at just 54. This is what pushed me to face my fears and sign up to the next UWCB event in Derby on April 6th 2019.

“The fight I would face would be nothing compared to what my auntie was going through.”

On Tuesday 5th February I attended a registration meeting to mark the beginning of my journey. At the meeting we learnt about what the experience would be like, when training would be and the requirements for taking part. The meeting made it feel very real and I wondered if I had gone completely crazy! I was nervous and excited, and I left the meeting feeling motivated, excited and reassured. 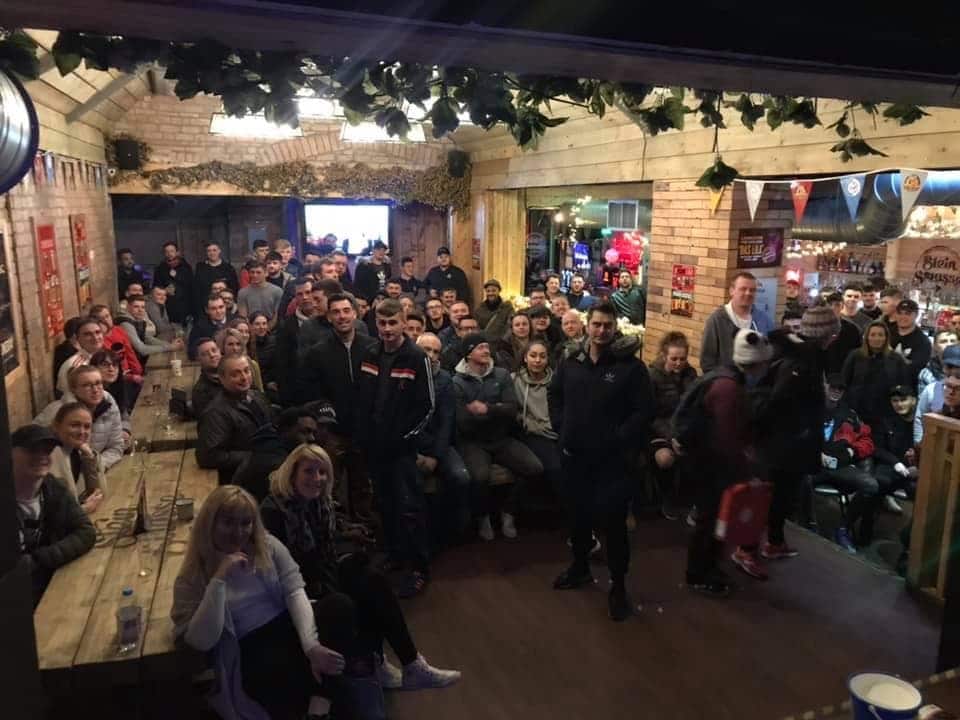 The following Monday it was time to start the 8 weeks of free training provided by UWCB. I’d never set foot in a boxing gym before and One Nation Boxing Club in Derby was like no gym I’d ever been to. It was a bit daunting at first, but it soon became like a second home, I fell in love with the sport and I couldn’t keep away. The trainers Clifton, Mikey and Latty were knowledgeable, supportive and encouraging at every session. The training was tough but brilliant, I lost weight, felt fitter than I had in years and it improved my mental health. 12 months on I still train at the gym when I can, sometimes taking my 5-year-old daughter along too, with trainers I now consider friends.

The eight weeks flew by and before you knew it, I was at the match up evening at a local bar where I found out who my opponent was. There was a lot of excitement in the air, we had a professional photographer and an MC there who called out all the match ups.

“Once I knew who my opponent was, I was raring to go for the main event.” 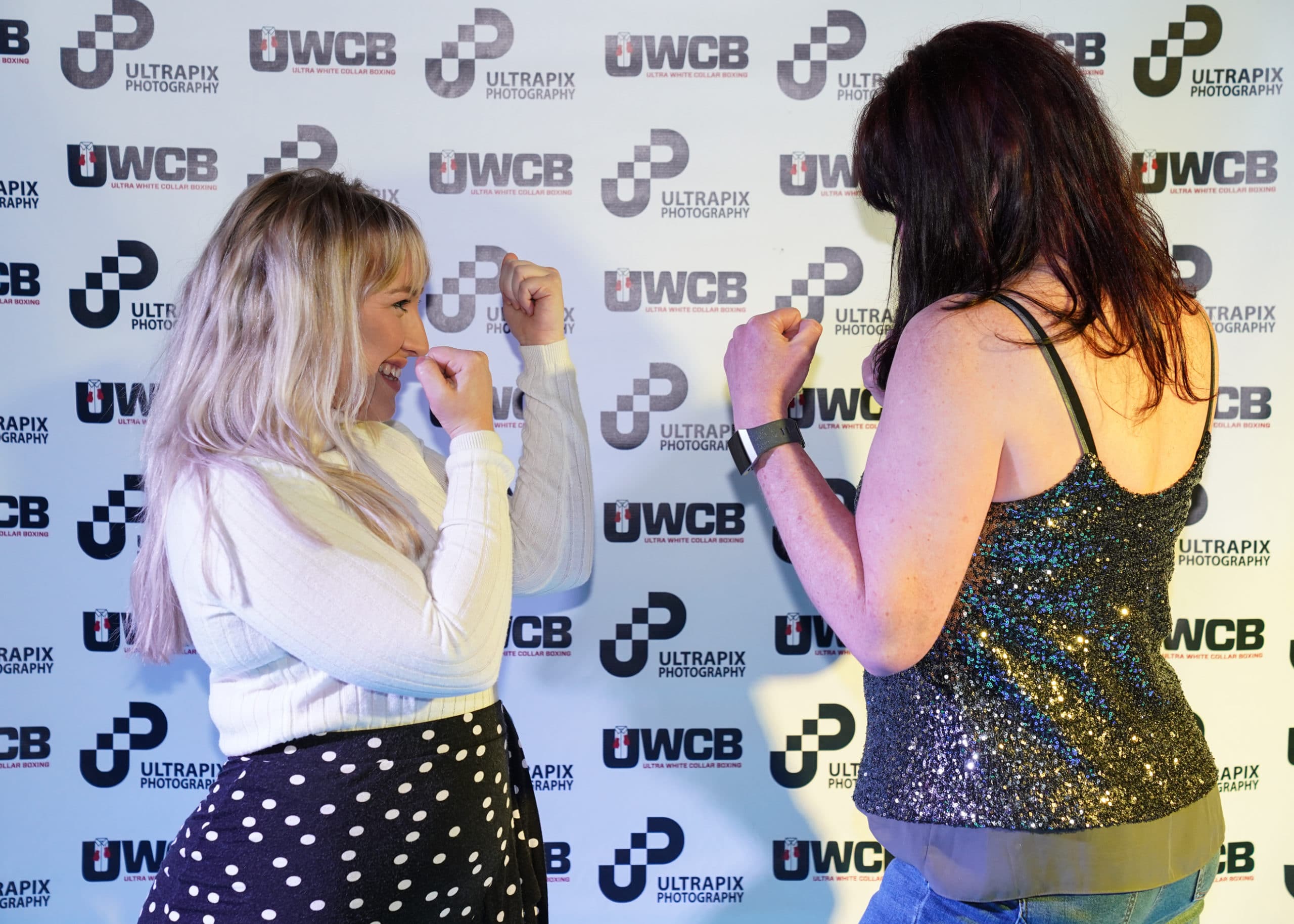 On the morning of the event I arrived at the roundhouse in the early afternoon for my prefight medical. It was surreal to see the venue empty and set up ready for my friends and family to arrive. 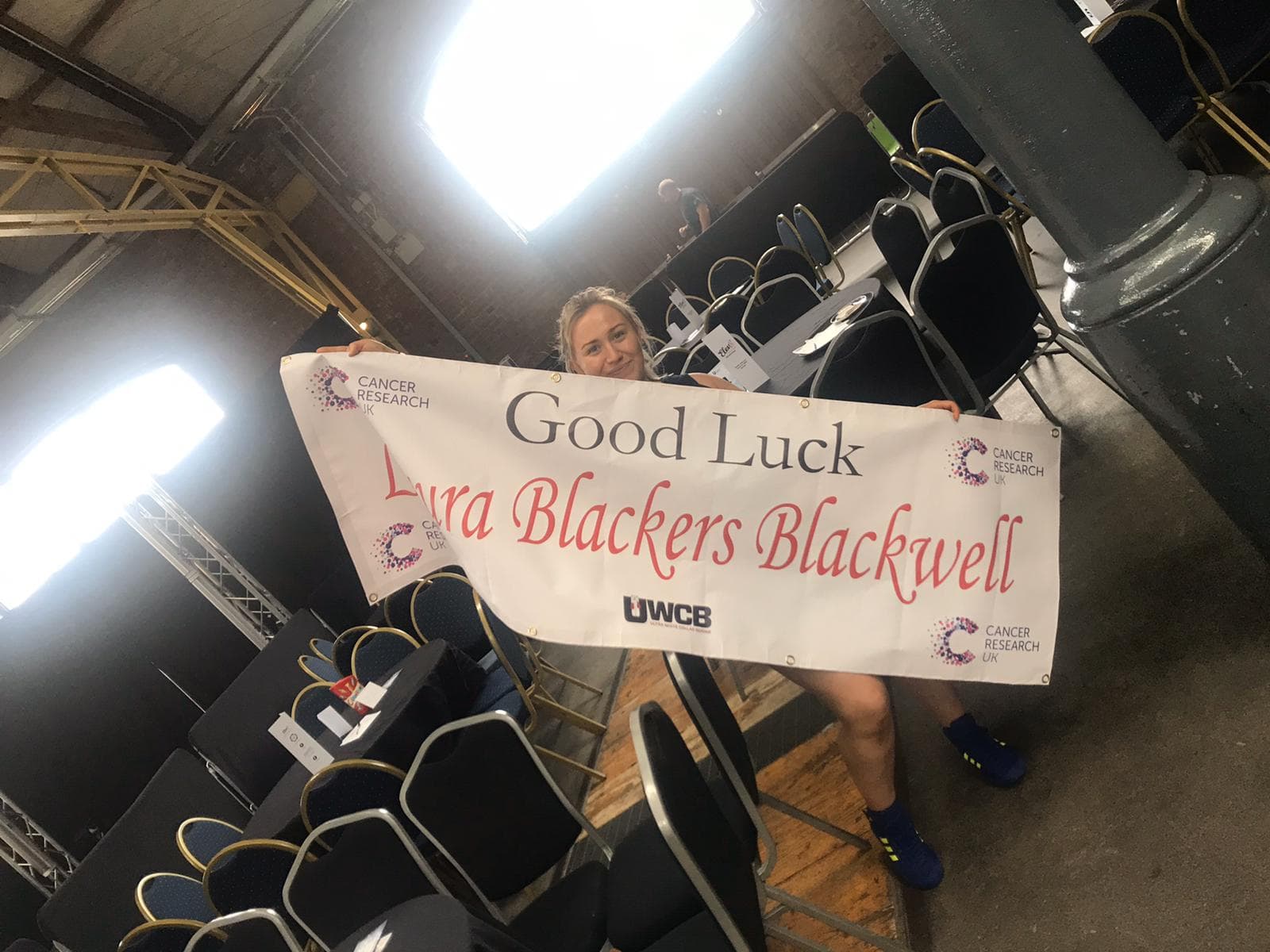 Fight night will go down as one of the best experiences of my life. It was terrifying but getting into the ring in front of 1500 people including all my family and friends was exhilarating.

I was not prepared for quite how proud my friends and family would be after the fight. My friends were completely in awe of me, my dad cried, and my phone didn’t stop ringing for 48 hours afterwards. I felt like a real-life celebrity. 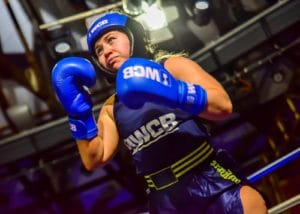 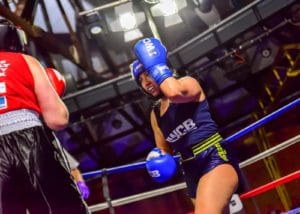 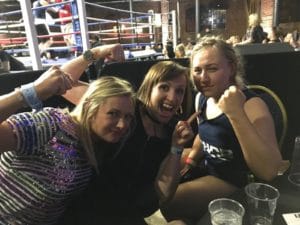 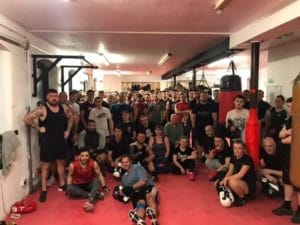 I lived, breathed and LOVED the whole UWCB experience and raised £2,500 for Cancer Research UK in the process.

Sadly, in July 2019 just 3 months after my fight my auntie lost her battle. I will continue to fundraise for Cancer Research UK until we eventually win the big fight against cancer.

If you are thinking about signing up, don’t think about it just click here and do it! It will be the best thing you have ever done. 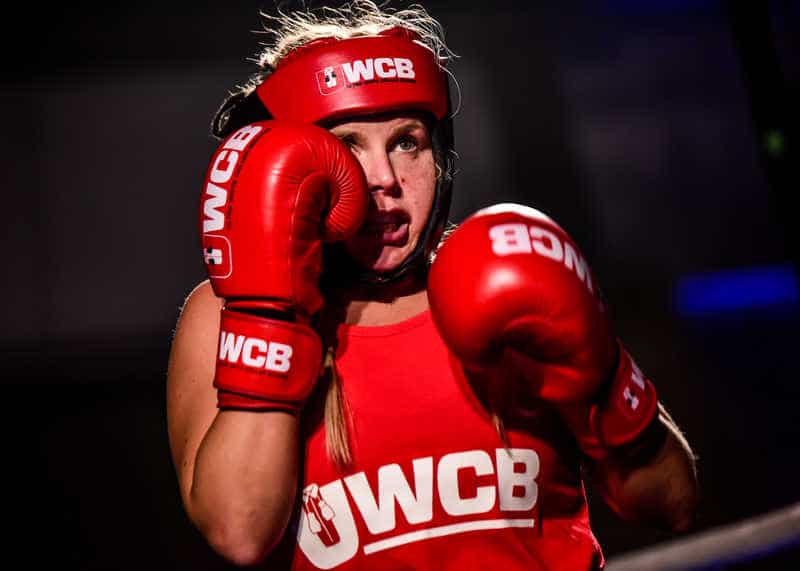 8 weeks ago on 10th July, I found myself questioning my sanity. Sitting in my car outside Rigs gym, trying to work up the courage to get out and go inside, every part of me was already regretting my decision to sign up. My heart rate was through the roof, I was sweating and already had nervous butterflies…..and I hadn’t even made it through the door yet! However, I was there and not willing to give up before I had even started and so I had no choice but to take a deep breath and head inside.

I spend my weekends dressing as a princess to entertain kids, walking into that gym for the first time put me further out of my comfort zone than I’d ever been. It took everything inside me not to turn around and head straight back out of the door. The only thing that kept me there was the thought of why I was doing it (well that and by quitting now, I’d lose every ounce of my dignity considering how many people I’d already told about it).

“I signed up in memory of my best friend Annie, who sadly passed away three years ago from cervical cancer”

I signed up in memory of my best friend Annie, who sadly passed away three years ago from cervical cancer, days after her son was born. Before she passed away she asked me, “If I die, will you shave your hair off to raise money?” At the time, I had no idea how poorly Annie was and so I jokingly agreed, deep down believing she was going to kick cancer’s butt. Having bottled shaving my head, I wanted to fulfil my promise and do something equally terrifying and out of my comfort zone.  Having never done ANY form of sport, I thought UWCB was the perfect event to do. I was determined to approach it with the same strength, resilience and determination that Annie displayed until the end.

From that first week, it was clear that the training was going to be brutal; star jumps, burpees, squats, more star jumps, squat-thrusts, press-ups, even more, star jumps, sit-ups, planks and a few more star jumps thrown in for good measure. I woke up the morning after that first session unable to put any weight on my calf, I was more than prepared to throw the towel in. In my desperation to come up with an excuse that I couldn’t continue with the process, I managed to convince myself that I had a serious muscular injury. Funnily enough, it turned out that perhaps my lack of cardiovascular based physical activity had something to do with why I now felt like I had been hit by a bus. And then reversed back over. Twice.

Get Your 8 Weeks Free Training

By the time my next training date rolled around, the constant ‘cramp-of-death’ tightness in my calves had eased rendering my “I’m injured”excuse void.  Off I went to session two – using my entire drive there to try and concoct another reasonable cause for exemption! However,  to my complete surprise, it felt like the entire hour flew by and as the days passed, I found that I was actually starting to enjoy the training – in fact, some small twisted part of me started to actually look forward to it (I know, I can’t believe it either!!).  I even brought my own head guard and roped my poor unsuspecting dad and brother into sparring with me in the garden – much to their delight.

“I found that I was actually starting to enjoy the training”

As the weeks flew by (funny how fast 8 weeks go when you know you’re going to be getting punched in the face at the end of it). The atmosphere and spirit within the gym got better and better. Although most would assume that the hardest part of boxing is being hit, it’s actually just as hard (and if not harder!) hitting someone else. I lost count of the times that I apologised after landing a blow – it seems I needed to work on my fighting talk!

As the big fight night got closer and we had moved from drills to sparring. This was the BIGGEST shock to the system ever, it’s amazing the effect that being in a ring has on your adrenaline and ability to remember any kind of skill whatsoever. I was enjoying the whole process so much that I even started to believe that I may actually be able to do this and pretend to be a real-life boxer for a night. I had gone from ‘all the gear, no idea’ to ‘Whitey the Mighty’ and I enjoyed telling people about it and listening to their (mainly useless) tips and hints ranging from “counter with your defensive” to “just knock her out” (neither of which I managed to pull off)!

In the blink of an eye, we were completing our final week, attending the match-up and arriving at the venue all ready for the big night. The culmination of 8 weeks of blood, sweat (from areas I had never even realised it was possible to sweat from) and tears (ohhhh so many tears!) was finally upon us and suddenly, everything that had seemed like some kind of bizarre future nightmare became very, very real. Money raised (over £1,600 in total for Cancer Research UK), hair plaited, medical passed, friends and family in their ringside seats,  I was as ready as I was going to be!

Now, I would like to apologise to our amazing trainer Sam but I’m not going to sugar coat this – the fight itself was the hardest physical (and mental) thing I have ever, done and I hated every single second of those six minutes in the ring! (No really, no exaggeration here, I really, really hated it!!).  If I’m honest, I don’t remember a great deal of details about the fight itself as it felt like it passed in a huge blur of shots (mainly to my face). I took everything she had, I gave her everything I had left back! Unfortunately, it wasn’t enough on the night and my opponent was crowned the (very worthy) winner. I finished knowing that I had left everything that I had in that ring, and in the respect of having done myself proud, I could walk out of the venue a winner.

So Ultra White Collar boxing – what can I say?

As a challenge, I wouldn’t have changed it for the world. 8 weeks ago, I was a girl who secretly battles every day against a lack of confidence and self-esteem, convinced that she wasn’t going to get to the end. On Saturday 1st September, that same girl left the ring. Now she also is starting to believe that she is, in fact, strong and able enough to do so much more than she had ever thought possible. For that alone, I owe the whole experience and everyone involved in it so very, very much.

Would I do it again?

Well in answer to that, If you check eBay you will find one pair of gloves, boxing boots, head guard and hand wraps listed as a bundle deal – perfect for someone else to take up the challenge to help punch cancer in the face and raise money for this truly incredible cause.

As Floyd Mayweather said, “Everyone is blessed with a certain talent, you have to know what that talent is….you have to maximise it and push it to the limit.” I think it’s fairly safe to say that my talent doesn’t lie in fighting (and trust me, I am more than OK with that). I have made a promise to my mum to stick to chocolate detoxes and sponsored walks from now on! So now, this is ‘The Mighty Whitey’ signing off for one last time… just ‘Whitey’ suits me fine!!

Take Part In Our Next Event